The Age of Conquest | Musei Capitolini

The Age of Conquest

The five-year project “I Giorni di Roma” (The Days of Rome) opens with a great exhibition of masterpieces of ancient art, coming from the most important European museums, and dating back to the period following the conquest campaigns in Greece (from the end of III century BC to the second half of the 1st century BC). This was one of the most crucial periods for the future cultural and artistic identity of Rome, not only in the Republican age.

The Age of Conquest begins from the time of the founding of the Roman Empire, when Rome gradually gained control over the Mediterranean, from Spain to the coasts of Asia Minor. This period sees the formation of a purely Roman figurative language, which treasured Greek artistic tradition, duly understood, absorbed and modified over the years. This is the period in which the ruling elite realized, with increasing awareness, the consolidation of its prestige and expressed it through art.
Between the III and the I century BC, Rome became the only hegemonic power over the entire Mediterranean basin. After the successful military campaigns in Greece and Magna Graecia, large amount of money and the rich spoils of war caused a change in taste that turned into a cultural revolution. Works of Greek art were exhibited during the triumphal procession of the generals Marcellus, Flaminius, Aemilius Paullus, Lucius Mummius and Pompeius. Their quality was outstanding and incomparable, with valuable materials hitherto unknown in the city, like pearls and precious stones.
Consequently, a large number of Greek craftsmen, architects, tutors, doctors and artists arrived in Rome. So, despite the opposition Cato’s conservative faction, the rapid hellenisation changed the city through the mixture of Greek and Roman models, as in the case of one of the temples in Largo Argentina: a round building, typically Greek, however built on a high podium in the Italic tradition. The same is true for honorary monuments: there are inscriptions in Greek on the pedestals of honorary statues, like the bronze statue of Flaminius erected at the Circus Maximus. Often, also the clothes of the characters depicted are of Greek workmanship, like the statue of Scipio Asiaticus on the Capitol.

The Sections
In the first section of the exhibition, entitled Gods and Shrines, are terracotta friezes and pediments coming from some temples: from the assembly of Gods (such as the San Gregorio Pediment at the Capitoline Museums) to the frenetic battle sequences (such as the Gatlatomachy frieze from Civitalba at the Museum of Ancona). For the first time, within the same exhibition, one can compare the works of Greek artists coming from Greece to those carried out in Rome: such as cult statues in temples dedicated to the great victories and commissioned by Roman generals: such as the Hercules of Polycles (Capitoline Museums) or the Diana of Nemi (Museum of Copenhagen). The section is closed by a sequence devoted to a series of Muses statues: beautiful terracotta specimens coming from the British Museum in London

The second section is dedicated to Honorary Monuments which gave prominence to the figure of the victorious general, generally depicted in military costumes, with armour, cloak and long sceptre. From the II century BC new Italic figurative expressions spread all over the world: the bodies are naked, posing authoritatively, and express the qualities and the charisma of the characters, such as the case of the beautiful statues representing two generals from Formia and Cassino (Museum of Naples) and from Foruli (Museum of Chieti). Nowadays, thanks to their depiction on coins, only few verified portraits of the best known leaders of the Republican period (i.e. Pompey, Caesar, Octavian) are preserved. In many cases, the honorary statues whose identification is still under investigation, like the many portraits of Aemilius Paullus on display here: one coming from Tirana and another exhibited at Palazzo Massimo in Rome.

The third section, Greek Way of Living, offers an in-depth study of the achievement of Greek taste in everyday life, even in the field of home furnishings with candlesticks, tables, craters, precious plates and statues coming from the Museum of Palestrina and the house of Julius Polybius in Pompeii (Museum of Naples). Mixing Greek elements from various periods, artists developed a new figurative language, through which they produced a number of entirely new paintings and sculptures.

Finally, a fourth section is dedicated to Burial Customs, in which the Romans are less influenced by Greek taste than any other aspects of public and private life. Actually, they seem to remain bound to their traditions, preferring to be depicted proudly wrapped in the folds of their togas, the symbol of Roman citizenship, and only rarely they are represented wearing a Chlamys (the Greek cloak) or heroic costumes, as in the funerary relief found on the Appian Way in Rome. Their wrinkled and hollow faces are those of old people during the Roman Republic.

Adults € 12,00
Reduced € 10,00
Free of charge for school groups (elementary and intermediate schools) and the disabled and a carer
Musei Capitolini + Centrale Montemartini
Adults € 14,00
Reduced € 12,00
According to the Municipal by-law n. 32 of 26/03/2009 and due to the exceptionality of the exhibition “The Age of Conquest” no free entrance to people entitled of grauity of age is applied. However, they are entitled to a reduced € 2.00 ticket.
Free admission is granted to: elementary and intermediate school groups, to disabled people and a carer and to Roma Pass holders if used for one of the first two free admissions.
September 25-26, 2010: European Heritage Days The Civic Museums Network joins the European Heritage Days on Saturday 25 and Sunday 26, September 2010. Temporary exhibition fees apply to museums hosting major exhibitions. Free of charge admission is granted only to eligible persons. The admission fee to the Capitoline Museums is € 4,50, while people entitled to gratuity must purchase a Ridottissimo ticket of € 2.00

END_OF_DOCUMENT_TOKEN_TO_BE_REPLACED 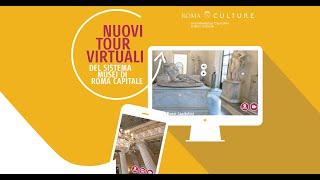